You are here: Home / SWSF News / Too Much Too Soon

TOO MUCH, TOO SOON CAMPAIGN

We’re too young to fail 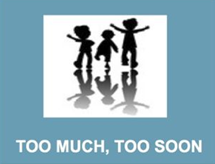 The new SCM Early Years Education (EYE) Group has now been established and is launching its first major campaign to challenge the early years being seen primarily as a preparation for school, rather than a unique stage in its own right, together with what it sees as a succession of developmentally inappropriate policy interventions in the English approach. We are arguing that this issue is too important to get wrong and that policy-making should be be put in the hands of people who really understand the extraordinary learning capacities and developmental abilities of young children.

In the long-term the group would like to see the formation of a multi-disciplinary National Council on the Science of Child Development, similar to that established in the USA by Harvard University https://developingchild.harvard.edu/activities/council/about_the_council/. This body would aim to make the child’s best interests paramount and to bring an understanding of the science of early childhood and early brain development to political decision-making. We would also like to see the development of Child Wellbeing Impact Assessments for all new policies (in accordance with Article 3 of the UN Convention on the Rights of the Child).

The Campaign has just been launched with an Open letter that has been signed by 127 eminent academics, early years leaders and senior figures.

The Telegraph has now run a poll on what age its own readers think is best with the following results. You can still participate in through the article page here.

Join the Day of Action on Weds 30th October!

Stand up for the Natural Developmental Rights of the Child
Put an end to developmentally inappropriate policy-making
Make your banners and book your coaches!
https://www.toomuchtoosoon.org/day-of-action.html

We are planning a sector-wide Day of Action for Wednesday 30th October and invite everyone to join us to show just how important we think these issues are. We will soon be providing resources such as posters and banners on the website but you can also make your own and promote your own related campaigns. We think it is only by coming together that we can really make a difference.

So whether you are a parent, childminder, playworker, early years teacher or headteacher, academic, lecturer, author or anyone else who really cares about the welbeing of children, please join us on the day. Let us know if you are coming though, especially if you are organising coaches, and we will share your details on the website.

In a recent inspection of Cambridge Steiner School, Ofsted inspectors found that "Pupils enjoy a … END_OF_DOCUMENT_TOKEN_TO_BE_REPLACED

In its recent report, Ofsted was full of praise for the culture and strength of curriculum at York … END_OF_DOCUMENT_TOKEN_TO_BE_REPLACED