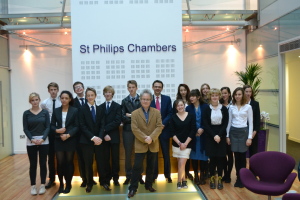 The Citizenship Foundation’s mock trial competitions facilitate a significant scale of progress and insight for participating students. This progress is crucially enabled by the support of professionals who step in and help students see a bigger world; Simon Ward, the team’s barrister mentor from St Phillips Chambers, and Martin Wilks, a school parent and trained barrister now working as a legal adjudicator specialising in housing law, were central to Steiner Academy Hereford team’s experience. Project based work is always more engaging and effective for students’ learning than more evenly spread content driven curricula. But there are also broader implications of this kind of project, where routes into self-expression and possible futures are tended with care.

“Perpetrator, legitimate, array, presumption, corroborate” were just some of words in the extensive range of vocabulary that this particular group of students stepped into. Just one week earlier I had sat with one of Her Majesty’s Inspectors (HMIs) from Ofsted discussing Bernstein’s principles of ‘elaborated’ and ‘restricted’ codes in language. Do students at our school have classical literature read to them? Are they able to recognize classical literature? Are they exposed to language that expands their horizons? What are those horizons? The team were justifiably proud and excited at their success in Birmingham and at the prospects of the national final in Edinburgh in March 2015. They approached the competition with a healthy lack of entitlement and expectation, partly enabled by not progressing in the Magistrates Court Mock Trial competition the previous year. Their exuberance and euphoria was empowering. But it is the deeper implications of projects such as this for education across the UK that might involve a wider legacy than just a positive experience of success. Yes, there is an elaborated code here. Yes, there is social mobility (and, indeed, social “fluency”, as David Cameron would have it). Yes, there is an exposure to personal responsibility in a way that teaches students about subjects such riot, violent disorder, possession of controlled drugs, knife crime, theft etc in a way that is far more engaged and effective than any PHSE session could ever achieve. But this same class had also previously wrestled in Citizenship Studies with the non-voting gauntlet thrown down by Russell Brand across a range of media. In his Newsnight interview with Jeremy Paxman, Brand had claimed that the Parliament elite was as it was because the environment of the Palace of Westminster echoed so closely that of their elite private schools. Elaborated code is not just restricted to language. Thus, Russell Brand in this case and Maxine Peake (in Silk) as a strong model of female progression, offer different codes, different routes of exploration.

When this same class undertook the Magistrates Court level of this competition last year, the headlines then were of the judges’ interest in the delicate crocheted badges the students had made. Corridor conversations with police officers, solicitors, JPs and other teachers clarified some of the myths around Steiner-Waldorf education. ‘Nimble fingers nimble minds’ helped explain our commitment to arts and crafts throughout school as well as the value of aesthetics and ethics in all areas of learning. We explained that our delayed introduction of formal instruction in literacy and numeracy follows the extensively evidence-based continental model, rather than being a cultish neglect of learning.

It was important for this class to have begun to explore the UK’s judicial system with an initial consideration of global justice and especially restorative models, such as South Africa’s Truth and Reconciliation Commission. The class following them in the school are extending this by looking at the World Justice Project and the World Values Survey – models that provide Citizenship Studies with a more complex map of the social and political landscape than the polarised left-right spectrum that arose with the seating arrangements of the French Revolution.  This link between the ethics and politics of the justice system was elaborated in the competition by Emma Edhem, one of the volunteer barristers who judged our school’s second round trial. She not only gave feedback and encouragement to the students, including a comment that the first forays into public speaking are terrifying for most people. She also gave an insight into her own development as a barrister through working principally as a criminal lawyer before going on to serve in cases involving geopolitical statecraft. If emancipatory education has any central tenet it was exemplified here by enabling the horizons of students to be constantly expanded and helping them see the relationship between personal fulfillment and public service.  Thus, the creativity of personal development and the teamwork of social intelligence take their place alongside the more traditional notions of learning through literacy and numeracy.

Queens Counsel Richard Atkins also stated to the four barristers performing in the regional final (including Steiner’s Oliver Meiklejohn and Maia Pandya) that the level of their advocacy surpassed that of some fully qualified barristers that he sees in court on a daily basis. Angus Braid was praised by His Honour Judge Worster as being an exemplary Usher. But the school won this heat precisely because their support for each other enabled personal performances to contribute towards an overall team ethic and an even level of quality.

It is more in this, the Crown Court (Bar) level of the competition than the Magistrates Court, that students encounter the moral complexity of the justice system in the UK and that it is not so much held within the actions or performance of individuals, but by the entirety of the system itself. For a teenager, let alone an adult, such a level of moral complexity is a challenge, but provides a valuable backdrop to the more mundane and challenging struggles in school when working with the social, moral and spiritual development of young people. This is especially the case when challenging bullying, discrimination and oppressive practice, and the insight required that treating everybody fairly is not the same as treating everybody in the same way. This is a broader social journey that we are all undertaking, and where Rudolf Steiner’s vision of education as ‘social renewal’ finds particular relevance. Such a vision is reflected well within more contemporary educational research around restricted and elaborate language codes that this competition so powerfully engages. The ethical heart of the judicial system is here democratised and made accessible to state educated teenagers, principally through exposure to its language, rituals and people.

Many parents are drawn to Waldorf schools because of their warmth and strength of community. A grass … END_OF_DOCUMENT_TOKEN_TO_BE_REPLACED

We are saddened to hear of the passing of Her Majesty Queen Elizabeth II; we offer our condolences … END_OF_DOCUMENT_TOKEN_TO_BE_REPLACED