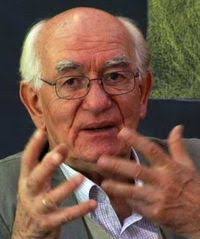 News came through to us yesterday (15th December) of the death of Georg Locher, whose funeral takes place on Friday 19th. Many will know Georg from his lectures & workshops at Easter conferences, his teaching on the Emerson Education Course & his 25 years as Class, Upper School & religion teacher at Michael Hall. After leaving Emerson to “a younger generation”, he joined the SWAS advisory team & visited a number of schools in addition to his regular trips to USA, where he mentored class teachers & made contributions to the Antioch University & Toronto Rudolf Steiner Centre programmes, always travelling with his trusty cello & giving well-prepared, but impromptu concerts.

Born in Zurich, where the Locher family owned substantial property, & a graduate of the Waldorf School he studied music at the Zurich Conservatoire & could have become a professional cellist, but chose instead to come to Britain where he trained as a Waldorf teacher & remained. Unusually, perhaps, his sense for the visual arts was as keen as his ear for music & he had a fine collection of paintings in his house about which he would speak engagingly. As anyone who has ever had tea with Georg must know, the house he shared with his wife Angela, was one in which a modest refinement & quiet elegance prevailed in everything. Although born in Switzerland, there was something of the best of Britishness in all this, a practical art that was unforced, warm & open.

Georg was a person of quiet enthusiasm. Often he would introduce into discussion a recent book he had found relevant to the topic in hand. He was always reading something new & did not confine his reading to Anthroposophical authors.  Perhaps balance is the key to Georg’s being. He often spoke of this is relation to teaching, exploring the polarities & finding the creative equipoise within them: Apollonian & Dionysian, Demeter & Persephone, “coming forth” & holding back”, form & freedom…His speaking voice too carried that message, a warm, expressive baritone. He had a gently self-deprecating humour usually accompanied by a soft smile around his eyes; announcing once during a lecture at a teacher’s conference, “As a young teacher I sometimes envied Pestalozzi – after all he taught orphans”, before going on to scold himself about how wrong he had been not to pay more heed to the parent’s role: his regard & care for others was strong. It was in the same the lecture that he also gave what for me is the best & most straight-forward statement of the qualities needed by a teacher, someone who must work to be:

Loveable for the children

Approachable for the parents

His legacy will certainly live on with many of us as he leaves this phase of life for the one beyond us.

In a recent inspection of Cambridge Steiner School, Ofsted inspectors found that "Pupils enjoy a … END_OF_DOCUMENT_TOKEN_TO_BE_REPLACED

In its recent report, Ofsted was full of praise for the culture and strength of curriculum at York … END_OF_DOCUMENT_TOKEN_TO_BE_REPLACED