You are here: Home / SWSF News / Crochet in Court 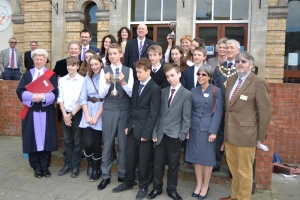 Taking the unusual step of entering a national court competition by fielding two teams from one class, with students of all abilities participating rather than taking a gifted and talented group forward as many schools do, Steiner Academy Hereford came away from the local heat in Hereford on Saturday 15th March with 1st and 2nd place. In addition to clearly strong team performances in a variety of formal legal roles, Bethan Glennon won the cup for the best defendant, and Oliver Meiklejohn and Louie Ablett won the cup for the best defence lawyers.

The Magistrates Court Mock Trial is a national competition organised by the Citizenship Foundation and magistrate courts with support from local charities. Teams for the competition consist of 13 students, with each taking a role as either a magistrate, prosecution or defence lawyer, prosecution or defence witness, defendant, legal advisor / clerk and usher. Each student explores their particular perspective on the case (one ‘Jaz Henry’ accused of dishonestly handling stolen goods – a bicycle) and is required to step into their part as fully as possible. In the competition itself they participate in two heats, one when the prosecution lawyers and witnesses have to play their part, and another when it is the turn of the defence team. Three judges, drawn from the bench and the police, mark students’ performances against national criteria. This includes observing each heat in court as well as the deliberations of those students playing the part of magistrates discussing the merits of the case in the retiring room.

The contribution of local magistrates was invaluable in supporting the students. Leigh Brazewell, organiser of the local heat, visited the school to give an overview of the justice system in the UK. As in previous years, discussion around more severe sentences for crimes involving discrimination or prejudice, whether involving a person’s race, gender, sexual orientation or vulnerability, provided a salutary context for incidences of careless classroom talk that can challenge all teenagers. Magistrates Michael Wilcox and Michael Ward also supported the class with astute and invaluable feedback on their performances during weekly run-throughs.

Somewhat unexpectedly, the teams from Steiner Academy Hereford also drew attention from the judges for their innovative crocheted red and blue badges, worn to distinguish whether they were either defending or prosecuting the case in one of the two heats. The “nimble fingers – nimble minds” and “slow-burn” pedagogy of Steiner Waldorf education and the uniqueness of the school as the first state funded Steiner Waldorf school in the UK, returned a number of times during conversations between the school’s teachers and visiting dignitaries, as verdicts were awaited and students calmed.

Preparation for this competition began just before Christmas 2013 for the current Class VIII (year 9). Since September, the class had been taking a weekly ‘Justice’ lesson, exploring both retributive and restorative forms of justice around the world. It so happened that the class visited the history of South Africa’s Truth and Reconciliation Commission in the weeks before Nelson Mandela passed. The balance of reconciliation and punishment within justice and the relationship between ethics and law has formed a basis and ongoing theme of the students’ work. Preparation for the competition itself allowed the students to engage with the professional challenges of putting these issues into practice. Whilst the school has previously participated in the competition this has been the first year that the project has been fully integrated into the curriculum for a whole class. It has offered the students a powerful experience of participation and commitment, beyond perhaps their success. In a broader context, the growing place of citizenship studies in the UK, exemplified by this competition, is converging well with the goal of Steiner Waldorf education, expressed by the Steiner Academy Hereford’s vision as cultivating the ‘moral imagination’ of ‘free thinking individuals’. 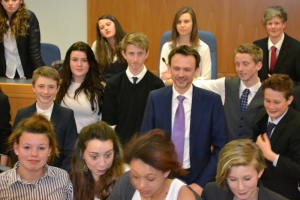 We are saddened to hear of the passing of Her Majesty Queen Elizabeth II; we offer our condolences … END_OF_DOCUMENT_TOKEN_TO_BE_REPLACED